Curtain up for poets and thinkers

Curtain up for poets and thinkers

Johann Wolfgang von Goethe and Friedrich Schiller: These are just two of the many famous names that are inextricably linked with the German National Theatre in Weimar. The two poet laureates laid the foundation for high-quality drama and music performances. Accordingly, high-quality materials were also required for the renovation of the stage entrance. Gutjahr products were used to reliably protect the newly laid Thuringen travertine from damage. 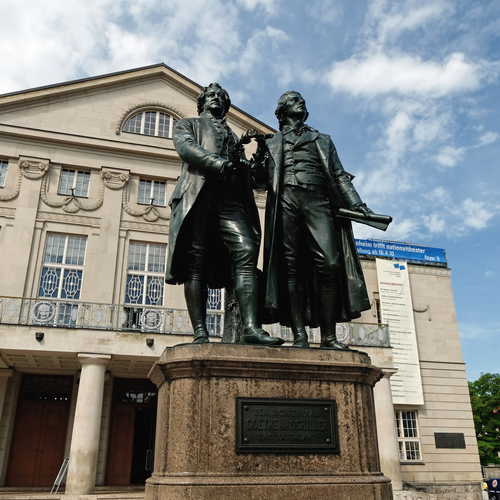 Build a representative new headquarters for the German National Theatre: That was the order given to Max Littmann in 1907. The well-known architect, who had previously designed the Hofbräuhaus in Munich, among other things, decided on a neo-classical structure with a façade made from Thuringian travertine. This façade has been preserved to this day - and is a symbol of Weimar together with the Goethe-Schiller monument.

However, the stage entrance of the theatre was not so representative for a long period: the artificial stone which had been installed there during GDR times was cracked in many places and some of it was loose. Numerous repair attempts had failed, and the surface needed to be completely renovated. The 100-year-old façade of the theatre acted as a template when the new covering was selected: the decision was made to also install Thuringian travertine on the pedestal and the steps.

However, installer Manfred Hauschild from Weimar did not want to lay this high-quality stone directly into the bed of mortar, because Thuringian travertine is a porous limestone that absorbs a great deal of moisture. For this reason, it was extremely important here for the water to be drained away quickly to avoid damage.

Drainage mortar as a problem solver

Because the installation height was low, the MorTec DRAIN epoxy resin-based drainage mortar was used, since it can be used from 25 mm and above . 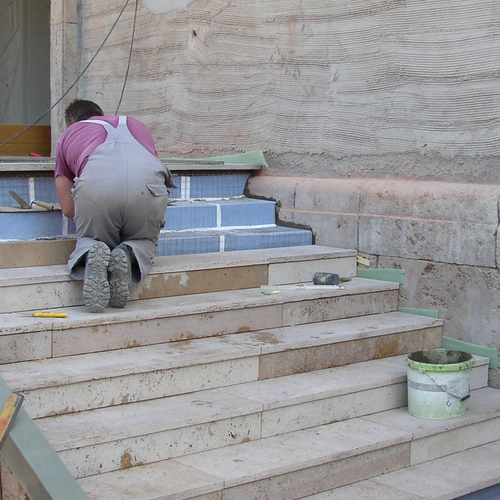 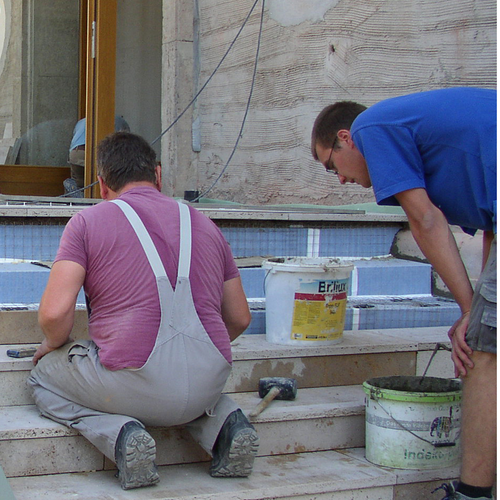 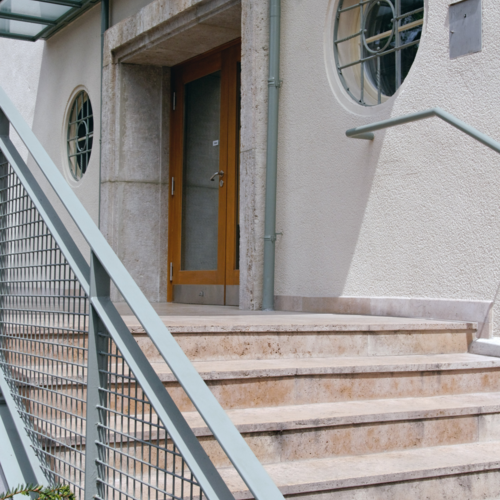 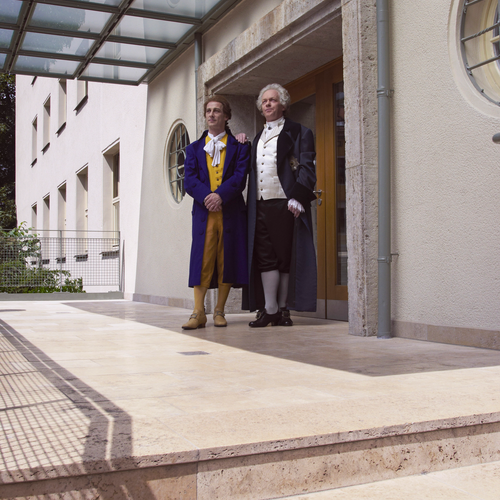 Drainage mortars or single-grain mortars are becoming increasingly popular for laying natural stone because they quickly divert the seepage water from top to bottom, and the stone is not exposed to water for an unnecessarily long time. However, experts recommend laying a passive capillary drainage mat beneath the drainage mortar because the mortar leads the water away quickly from top to bottom. However, an investigation by the Materials Testing Institute in Darmstadt has shown that it is capillary-active on its own. This means: If seepage water accumulates on the waterproofing, e.g. at the overlaps of the waterproofing membranes, the water migrates back to the surface through the drainage mortar. This creates efflorescence, moisture stains or limescale plumes on stairs, and the surface becomes a renovation case.

Installer Hauschild therefore suggested Gutjahr products to the client: the AquaDrain EK surface drainage mat for the stair head surfaces and the AquaDrain SD step drainage system for the external steps. The two systems work by supporting the entire covering. Because of this, the drainage channels form a defined cavity, and water can run away more quickly and effectively. At the same time, backwater on the waterproofing cannot run back into the covering structure, where it could cause damage. The covering also dries faster because of the back ventilation. Both systems have a special mesh or special fleece as the covering, which remain permanently water-permeable – a major difference from other systems. The special thing about AquaDrain SD is also the composition: The pre-formed angled elements can be installed directly onto the steps and do not have to be cut to size, which saves time.

The challenge of the construction height

Another challenge: Because of the door connection height of the stage entrance, a maximum structural height of approx. 65 mm was specified - including the 30 mm thick travertine. This means that only 30 mm or so remained for the drainage mat and the drainage mortar. A cement-based drainage mortar which requires a layer thickness of at least 50 mm when it is laid floating on top of a drainage mat was therefore ruled out. For this reason, a solution from Gutjahr was used in this case: MorTec DRAIN, an epoxy resin-based drainage mortar. It can be used from a layer thickness of just 25 mm - i.e. half the thickness of the cementitious single-grain mortar. In this way, a structure which was lower but safer was able to be implemented at the stage entrance in conjunction with the drainage systems.

Thanks to the complete dismantling and consistent rebuilding, the stage entrance of the German National Theatre now shines in new splendour – after a construction period lasting just four weeks. Because the installers had to use the theatre break so that operations could then continue without problems. And everyone involved is satisfied with the result: The stage entrance now has a grander character, and would definitely also please Goethe and Schiller.

About the German National Theatre in Weimar

The German National Theatre is the successor to the Weimar Court Theatre, whose director was Johann Wolfgang von Goethe. The neo-classical building by architect Max Littmann was completed in 1908, and the original façade has been retained. The theatre has had an eventful history: several renovations, influential world premières, famous conductors and important political events – the most famous being the foundation of the Weimar Republic. Today the building is home to the most important Thuringian theatre and the Weimar State Orchestra. The Goethe-Schiller monument in front of the main entrance has now become Weimar's landmark. 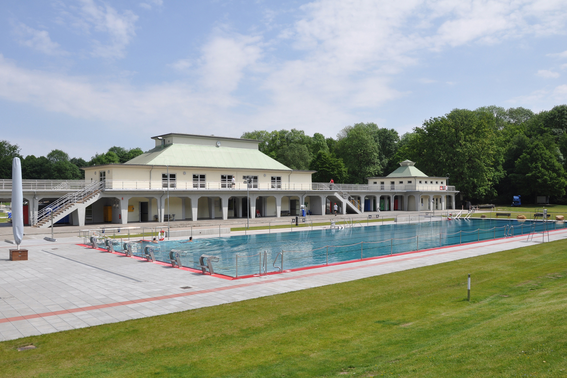 Renovation of the walk-on roof and the steps