Free travel on a secure surface

Free travel on a secure surface

Refurbishment of a car dealership: Driving on a secure surface

The floor of a car dealership is subjected to heavy loads, particularly in showrooms, which is why the commissioned flooring company had to ensure that the covering could still be driven on after the renovation of a BMW car dealership in Riesa, Saxony. There was also another challenge: there were old expansion joints in the floor which separated the heating circuits of the underfloor heating – and the new covering had to be installed on top of them. The Gutjahr IndorTec FLEXBONE-VA decoupling system made installation on the heavily loaded mixed substrate possible.

The Andreas Pulz BMW Car Dealership in Riesa opened in the early 1990s, since when the flooring has not been renovated. Therefore, after a quarter of a century, the owner decided to completely replace and redesign the floor. The renovation of the 620 square metre indoor area started in February 2016, consisting of the showroom, the reception area with workplaces for service and workshop employees, and the delivery area with workplaces for sales employees.

Specialist company Andreas Löffler GmbH from Grossenhain, 20 kilometres away, was given the order to lay different coloured porcelain stoneware tiles in sizes of 30 x 60 and 60 x 60 cm. The challenge when doing this: the renovation work had to be carried out during ongoing business operations because the dealership was unable to interrupt sales. The schedule was accordingly tight: everything had to be completed in just two and a half months.

Jörg Schaffer, master tiler at Löffler, and his team therefore divided up the renovation into three construction phases and replaced the floor areas one after the other. The individual areas were protected from each other by dust partition walls, which allowed the other areas to remain operational. In order to adhere to the schedule, five to six installers worked continuously on the renovation - ten hours a day, six days a week.

Together with Gutjahr, Jörg Schaffer therefore decided to lay decoupling mats from the IndorTec FLEXBONE-VA system over the old expansion joints in this area. Gutjahr developed the decoupling system specially for laying highly stressed areas indoors or as a combination of decoupling and composite waterproofing in wet areas. Thanks to the patented bone shape, the decoupling mat provides outstanding adhesive shear strength and adhesive tensile strength. “This means that the system can reduce strong movements from critical substrates just as easily as high dynamic forces from above,” explains Gutjahr managing director Ralph Johann. This was ideal for the redesign of the car dealership: after all, the floor had to be able to be driven on with vehicles again after the renovation. And: The renovation was to be completed as quickly as possible. But that wasn't a problem with Gutjahr's decoupling system either. The mat can be smoothed out “with a single wipe” because the adhesive mortar is optimally distributed in the open bone structure. This means that the system can be processed up to 30 percent faster than comparable ones.

The installers were able to insert new expansion joints into the tile covering on the IndorTec FLEXBONE-VA decoupling mat that corresponded with the grid. The old expansion joints were secured against height offsetting with crossbars beforehand.

The architect's office which had put the renovation work out to tender originally preferred decoupling mats from another manufacturer. But the master tiler Jörg Schaffer convinced them to use the Gutjahr product because he has been working with Gutjahr for years and is well aware of the advantages of the decoupling system. The architect's office finally agreed, and the laying was able to go ahead. The first heating phases in the showrooms have already proven that Gutjahr decoupling works well: the newly laid floor survived the first winter without any problems.

Renovation of floor covering in the interior 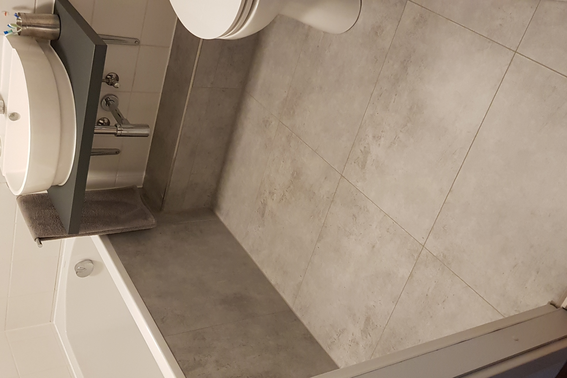